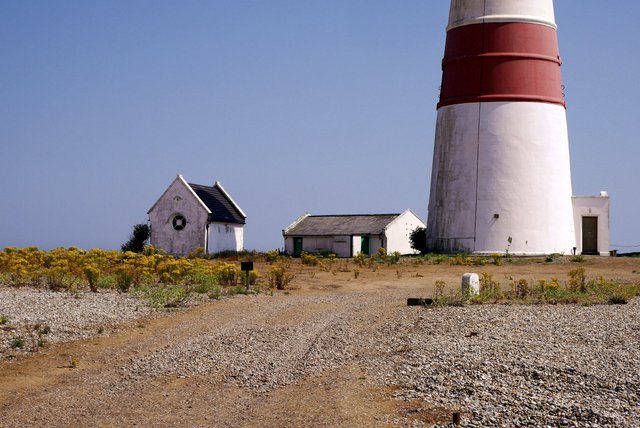 By sea we steer away from the headland where a lighthouse resides and on land it is often the very landmark we head for. Well that is what I did on this baking hot day when the sun was overhead and the breeze deceived.

In this light, the lighthouse is not at its best but is still remarkable since the 30 foot tower has stood here on Orford Ness for over 200 years and no doubt saved many a ship from grounding in this coast’s shifting sandbanks. Today it is at imminent risk of falling into the sea due to coastal erosion and is being shored up against the inevitable.

The Lighthouse is both iconic symbol and most pragmatic of monuments and James Ramsay, in Woolf’s eponymous novel, comes to view the lighthouse in these two very different ways – as boy then man- the visionary and the factual. The photographer tends to seek the former:

“…the problem of space remained…Beautiful and bright it should be on the surface, feathery and evanescent, one colour melting into another like the colours on a butterfly’s wing; but beneath the fabric must be clamped together with bolts of iron.”

At this time of day and from this angle, I only managed to capture the bold,  bolt uprightness bolts of iron characteristic.

Softer lighting or maybe an upshot or even wider angle would have brought out its best features, especially as the surrounds are so low-lying by contrast. Instead my eye caught the shadowy top on the adjacent building and so the lighthouse is here by inference. Perhaps the most fitting of photos for this de-commissioned tower – a monument in a garden of shingle and resplendent golden Ragwort.

For Photographers:
11 Tips: How to Photograph Lighthouses – Todd Vorenkamp

For Readers:
To the Lighthouse by Virginia Woolf (PDF)

2 thoughts on “To the Lighthouse”